My brand new chrome cast that came with my stadia is burning hot to the touch. Also... I think it’s overheating and causing the random disconnects. Anybody experiencing this issue?
Tags (3)
4 Kudos
Share
Reply
14 Replies
Highlighted

Yup, but google claims they've done tons of testing and they have not experience any heating issues, it's the answer they gave on reddit but there is a lot of people getting literally burnt by this.

https://www.amazon.com/Stream-Cooler-Round-Stuttering-overheating/dp/B076DN1WX8/ref=sr_1_3?keywords=...    that is the current solution since it appears its our fault and no googles in giving us something that has for years had issues with  becoming lava.

Gaming excessive and long game sessions is going to toast some chromecast.

https://www.youtube.com/watch?v=tB4UldlJPFw&feature=youtu.be he opens up the inside of it and you can see why a few of them are having issues.

I'm not sure why there aren't more responses to this thread.  This wasn't something i was aware of but after hearing of this, I walked over to the chromecast just to check on it and it was HOT man....Like super hot.  My gameplay didn't stop.  I had played for about 3 or 4 hours straight and that thing was scalding.  I guess as long as it doesn't burn out or catch my apartment on fire, I don't care. lol

you'll find a scripted response a lot of users are using on reddit, "it's fine so and so is made to be under immense heat, touching it will be hot but everything is fine". I just roll my eyes to that response because anyone knows with long sessions of gaming a repeated gaming that the heat is going to eventually become an issue. It'll cause resetting, freezing, and more simply replacing it with another chromecast won't do anything either since it's a design flaw google refuses to change.

one search about chromecast and you'll see this issue has been something that has been talked about for years now and the only solution you'd get? is from other users posting MODs. it's flipping crazy how they are brushing this off.

I can't touch my Chromecast after an hour of gaming, but I'm not experiencing rebooting issues at all...

Mine also is scalding hot. I have experienced frequent controller disconnects.

Controller disconnects for me too..... I think it's a wifi problem.

77'C after an hour playing on Destiny 2 at 4K. CCU supplied with Stadia. No shutdown issues so far 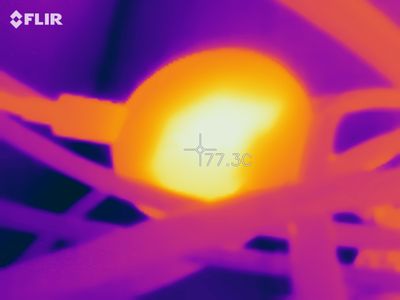