I have major audio/video sync issues with Stadia... but on the same chromecast ultra my other apps have no audio sync issues. Anyone else experiencing this?

I have a TCL Roku TV and was having really bad audio lag playing on CCU. It was really apparent in Destiny 2. I finally fixed mine by disabling the "Volume mode" in my TV settings. The one that keeps the volume highs and lows a bit leveled. I now have no lag.

So if you have that setting on your TV or whatever sound system you're using, perhaps try turning it off.

This probably won't help most of you, but hopefully it can help at least one other person.

I've had the exact same issues here with destiny and samurai showdown, and a similar response from google support. The last update they said basically that they're working on it, but at the same time suggested to look at QoS settings on my router as if it's still just a problem at my end.

I tried tomb raider more recently and, surprisingly, that actually seems to be OK for me, or at least if there is an audio delay it is much less noticeable.  Just curious if anyone else has tried it, since it was one of the december free games.

@DarkAlphaI took a chance on Borderlands 3, based on my experience with tomb raider, and that seems OK too, at least for me.  But beware I've seen other issues with bugs and pretty severe drops in framerate (still enjoying the game though).

The lag in Tomb Raider is horrendous. Check out the begining when he taps his chest:

This sounds bogus. I have a Sony XG90 and had lag even when connected through my sound base. I also have my Xbox connected directly to the TV and in Game Mode and there's no audio lag there.

hjalle
Community Member
Jump to solution
Also tried connecting to a/v instead of tv now and it solved the problem. Thanks!
0 Kudos
Share
Reply

I have the same in destiny. Works on pc with ethernet, but lag with CC on both wifi and ethernet. Contacted support who suggested I should contact bungie.

I've just spoken to somebody from google support about this. I don't have much to update other than to say they've logged it and escalated it to the next support tier up. Apparently they are going to do some internal tests to try to replicate the problem and have taken my number so I can help troubleshoot a bit more. I've also told them about this forum post and the fact there are a lot of us with this problem and that we've had no response or support so far. Fingers crossed this might start to make some progress!

EDIT: I would strongly encourage any of you having this issue to report it as well... the more reports they get, the more likely they are to do something about it:

@Vohlthx for sharing! And u are right contact google. Can someone put the link for google chat under my post. Thx! More people....more attention! Let's be a hard but fair community  towards google. And tell them like me and other people that they have to be more present in this official stadia forum! Thx. Peace and out

I have the exact same issue, somehow the audio is synced when playing with headset though.

Unfortunately I have tried to contact them on multiple platforms, but Stadia support isn't replying anywhere...

tropoFarmer
Community Member
Jump to solution
Exact same issue for me to a T. Games are unplayable. C'mon, let's figure this out.
0 Kudos
Share
Reply

I finally got a reply from Stadia on twitter about this on Wednesday last week, it's not telling us a lot other than it's been escalated and they are "on top of it". I couldn't even get a simple answer or acknowledgement to say if it's accepted to be a defect they need to fix... If I haven't heard back from them by Wednesday this week I'll be chasing them up again.

I'm absolutely lost for words at the lack of communication and support with this issue....... 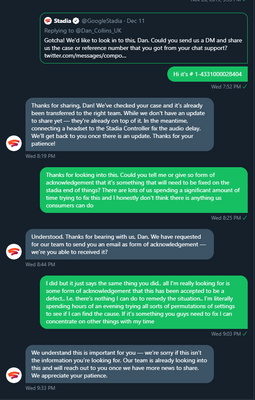 DarkAlpha
Community Member
Jump to solution
Has anyone tried playing Borderlands 3? Does it have the same audio delay problem on Chromecast? I feel like it will be a problem across the board, but you never know.
0 Kudos
Share
Reply

So I've just cancelled my subscription. I've been in contact with Stadia customer support over twitter for the last couple of weeks and months, they have been very pro-active in contacting me, but they are never able to answer any of my questions or give me an actual update. I had one message asking me to power cycle my controller...... I had another just asking if it's any better, when I asked if they had done anything that would cause the issue to be "better" I was met with a stock reply along the lines of, "our technical people are busy working on a fix"..... Let's be real, they are clutching at straws, they have no idea why it doesn't work, or probably more likey, they can't fix it because the infrastructure simply isn't ready. We've all paid a lot of money to be glorified beta testers and honestly, I'm feeling like I've been had.

This is the biggest and most viewed topic on this forum from what I can see and it's being ignored. Several of us have reached out to Chris and Grace and had no reply. This issue is falling on deaf ears and the reason I'm cancelling is because this stance of selling stuff en masse with no real way to speak to the team behind it is not the way we should be going. I've searched discord for other people reporting this only to see other people shoot them down because, "it's not happening to them"... It's pathetic.

The gaming industry in general wanted Stadia to fail becuase it threatens everything we know, PC lovers, hardware manufacturers, Sony and Microsoft's future consoles, etc. it was within Stadia's gift to prove us all wrong, and honestly, they screwed it up. Still nothing higher than 1080p on chrome, limited android phone support, multiple missing features. I continued paying my sub for 2 extra months to give them the benefit of the doubt, but let's be honest, this issue was reported in December......... We're nearly 4 months later and still nothing.

Stadia, I REALLY want you to work but I've had enough. I'm going back to my trusty PC and PS4. I really hope you address this issue and sort out your appaling comms with your customers. (We all seem to have forgotten the launch debacle!)

Lol I totally forgot about this issue. I did manage to fix it. I simply turned on my PS4 Pro and voila! Perfect audio and visual sync!

All jokes aside. This will never get fixed. I've given up and my controller is stored away. Im done with Stadia and have been for awhile. shameful.

It’s crazy there has been no acknowledgement of the issue let alone a resolution. I was ready to cancel until they offered the two free months. I have the mouse jumping issue when I play in chrome too, so both ways I can access are borked. Once I complete Doom Eternal it will likely be the last time I use Stadia until this is sorted and my sub will be cancelled. Those next Gen consoles are looking awfully tempting now.

Yesterday i read that 5.1 Sourround sound now works on chrome browser. i thought maybe google adressed other sound problems too. so i tried playing stadia on chromecast and what can i say. the audio delay is gone. can u try it too guys?! Please send some feedback. i didnt use stadia for month because of the audio delay! thx

I don't know if I'll be helping anyone still, but I found a solution for the exact same problem:

My setup is as follows:
Sony XE55 Android TV with a Sony HT-CT290 Soundbar
Chromecast Ultra with LAN-Access to 100/40 MBit/s (down/up) internet.

The gaming experience was very smooth, but I had the exact same audio latency. I gave up on stadia after several tries and just tried again after the ~5 months of Stadias existance after moving to a new home and the problem still existed, so I tried around and I managed to get the lag to disappear when I

1. Disabled my Soundbar (Audio System in the (german) settings) and

3. switched the "Surround"-Setting to anything different than before. The audio lag was gone. I can even change the "Surround"-setting to the same setting again, but I have to switch it once for it to work. Very weird behaviour.

I noticed this after I tried my CCU on my PC's screen (which has audio out) and it worked flawlessly there.

I'm still feeling like all of this shouldn't be necessary as the soundbar is working flawlessy when I play with my Nintendo Switch for example, but at least it fixed the issue for me.

Hoping to have helped someone. Cheers

Not sure why I'm still giving Google/Stadia the benefit of the doubt but after giving it a bit more time and seeing some people seeming to get over this I decided to give it one last attept. The audio lag is improved, but it is still there. What's really sad is the fact that before I could at least say the gameplay and lag was still OK. I've noticed a very obvious degradation in gameplay since the last time I played via chromecast. Before it was only the audio lag on CCU that was the issue. Now I'm seeing micro stutters and occasional input lag on top of the bad audio.

I have a TCL Roku TV and was having really bad audio lag playing on CCU. It was really apparent in Destiny 2. I finally fixed mine by disabling the "Volume mode" in my TV settings. The one that keeps the volume highs and lows a bit leveled. I now have no lag.

So if you have that setting on your TV or whatever sound system you're using, perhaps try turning it off.

This probably won't help most of you, but hopefully it can help at least one other person.

Nope, not using a sound bar here and my TV is in game mode which disables all special audio options. Lag is there. Lag cannot be fixed.

It's fine though, I gave up on the platform ages ago.

This thread seems to describe the cause of the issue