We are excited to share two new titles that will be available for Stadia Pro subscribers for the month of December.

In addition to being able to claim both Bungie’s exceptional multiplayer first-person shooter Destiny 2: The Collection and the stylized fighting game SAMURAI SHODOWN, starting at 9 AM PST on December 1st, gamers will also be able to claim: 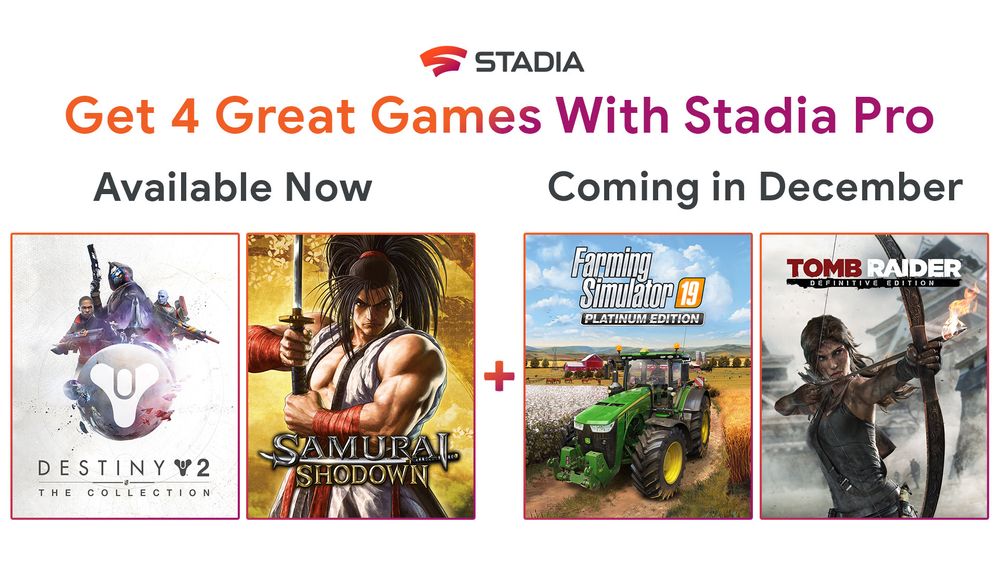 Become a modern farmer and develop your farm on two huge American and European environments, filled with exciting new farming activities, crops to harvest and animals to tend to. Drive over 300 authentic vehicles and machines now including John Deere - but also Case IH, New Holland, Challenger, Fendt, Massey Ferguson, Valtra, Krone, Deutz-Fahr, and many more. Grow your farm online with other players!

The cinematic action-adventure that forced Lara Croft to grow from an inexperienced young woman into a hardened survivor has been re-built, featuring an obsessively detailed Lara and a stunningly lifelike world. To survive her first adventure and uncover the island’s deadly secret, Lara must endure high-octane combat, customize her weapons and gear, and overcome grueling environments. The Definitive Edition of the critically-acclaimed action-adventure includes digital versions of the Dark Horse comic, Brady games mini-artbook and combines all of the DLC.

In order to add these games to your library, open the Stadia app, click Store, and claim them under Stadia Pro Games.

@Dunnkare I'm guessing you are somewhere in Europe if it's already 1PM...the games will be up for you at 6PM, 5PM in the UK from what I gather. As I type this it says underneath

So when that's 9AM it should go live...kinda strange move, but also to be fair to all users to get things at the same time...you have to wait til it's December 1st everywhere so can't fuss too much...as long as it all goes smoothly at 5/6PM that is aha

Founder
Please be patient 🙂 usually announcement and also the Stadia launch were at 6PM CEST.. so wait a little! 😉
1 Kudo

Sarah11345
Community Member
Hey I have a question. Today is December 1st and I still haven't received my games. So when am I gonna get them?
1 Kudo

To those crying about the next two games. If you did purchase them you're better off as if you dont keep paying for the Pro Subscription you lose those games. I'd rather spend the $10 on Tomb Raider Definitive and have the game instead of getting a "free" version that goes away of I dont wish to continue paying monthly.

PhilipJFry
Community Member
@Sarah11345 @Dawglls Sony and Microsoft make you wait 5-6 days into the new month before they update. Why is google supposed to be sooner?
1 Kudo

@PhilipJFry Because they said so.. "starting at 9 AM PST on December 1st, gamers will also be able to claim" the new games.

So far, Stadia is a big pile of lies and misinformation.

@Medic Yea, I realized that, I didn't see the PST before. But I'm still frustrated with Stadia.. 😛

Technically it did say 9am PST which was a 1min ago today so check and recheck it MIGHT be there......hopefully one thing goes right.

Come on guys, are you going to do ANYTHING RIGHT?! If you're going to give us Pro deals that are only available for paying members, then make it the best versions! Especially if it's FARMING SIMULATOR!!

Geez... So many bad decisions during this whole Stadia fiasco. It makes me wonder if you guys are really invested long term or if it's just some idea you wanted to play with

Why are you displaying Farming Simulator : Platinum Edition in the picture when the download is for the Standard Edition? 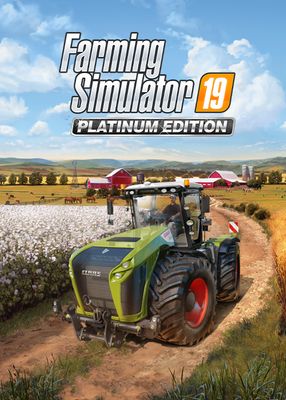 Hi there @GraceFromGoogle seems like someone did an oopsie and got everyone’s hopes up for the platinum edition of farming simulator, where you presumably get a real John Deere machine to muck about with.

Any chance you might have forgotten to check which version you are getting, and while you’re at it, could you also click the button for us Europeans who have been patiently waiting this crisp December for our advent/stocking stuffer?

Please, update picture. Farming Simulator is NOT the Platinum Edition

I claimed my December games this morning. Why did we get the standard edition of Farming Simulator and not the Platinum Edition that was pictured above?

You said you were going to refund those who already bought Farming Simulator. What if they have the Platinum Edition, will they get to keep it?

Possibly the best solution to this mess would be to let those who are interested in it claim the Platinum *Expansion* to the standard game for free.

Thank you for making this right!

So everyone were able to claim Platinum Edition in the end. Thanks Google! I will start farming today 🙂

Yes, Google fixed it and i claimed Farming Simulator the Platinum Edition today.

Never mind new games they can’t even get 5.1 working I have Chromecast connected straight into my av receiver and no 5.1 that is not good I have been around hifi and av for many years and I know it should work so come on Google get it sorted you need to sort this out please

Thank you @StadiaTeam for fixing this quickly. You guys are great!

Awesome! I'm glad to see this was fixed. I'm still a little worried that almost everything is bring done incorrectly first and having to be fixed. But at least this was fixed quickly

I know there are tons of intelligent folks working at Google, so I'm going to be positive and believe that things are going to be much better than what we've seen so far.

Back together at last - Farming and Lara Croft....it's the dream team we always wanted #PloughRaider

Still waiting for a game I actually want to play....

I have no idea 💡 why I bought this game system:? It’s not been anything like they said it would be. I thought we’d get GTA series with RDR2 but of course they give use stuff I can build on cpu like Samurai games I’ve had since day one and want to sell entire game system. I’ve never been disappointed ☹️ in game system not even with the Mine game on cpu 🤣 but this stadia isn’t even close to all the hype we heard here. Disappointed 😔